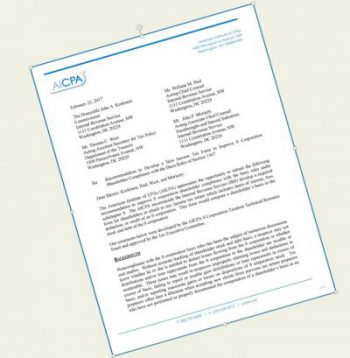 We’ve all been there. You pick up a new client – an S corporation and its shareholders — and things are going swimmingly. And they should; after all, S corporations are infinitely more manageable than their partnership siblings, courtesy of the simplicity and rigidity mandated by subchapter S.

But then, something happens, instantly turning your low-maintenance relationship into a huge headache. The S corporation generates a tax loss. Or makes a distribution. Or perhaps one of the shareholders sells his or her shares.

And that’s a problem. Because in order to handle any of those situations, you now need to determine the shareholders’ basis in the S corporation, which in all likelihood, will require you to recreate history that you simply don’t have.

But before we get to that, an overview:

This means, of course, that when determining a shareholder’s stock basis, you can’t simply look at a moment in time; rather, you need to see the entire picture, starting with the moment the shareholder acquires ownership of the stock before making the required adjustments for the entire period of ownership.

Making matters worse, stock and debt basis are shareholder level attributes, meaning it’s up to the shareholders to track basis, not the S corporation. As a result, even if S corporation returns are available from the beginning of time, if the shareholder hasn’t kept detailed records of capital contributions and prior sales, it will be impossible for you to recreate basis accurately.

In a perfect world, when you pick up a new S corporation-shareholder client, the prior accountant would hand you a meticulously-tracked basis computation, allowing you to simply take over where he or she left off. But the reality is this: few accountants track shareholder stock basis as required by the Code; instead, it’s one of the many aspects of our daily tasks that is at risk of being ignored until it becomes an emergency.

And when it does, it’s often too late to do anything meaningful about it, as the records necessary to accurately re-compute basis are typically discarded soon after the client transitions from one preparer to the next. Or perhaps the prior accountant only prepared the corporate return, and thus can only fill in some of the blanks. This leaves you – the unfortunate soul tasked with properly determining the consequence of an allocated loss or distribution or sale of stock – to pick up the pieces and do what you can. And despite your best efforts, without the necessary history, even those best efforts will lead to an incorrect answer.

If you think this recreation-of-basis conundrum happens less often than I’ve implied, consider this: in a December 2009 GAO Report, an analysis of audit examinations from 2006 through 2008 revealed that over $10 million of improper losses were deducted by S corporation shareholders who didn’t have the requisite stock or debt basis to claim those losses.

Enter the AICPA with a proposed solution to the problem: a new shareholder level tax form. In a recent letter to the IRS, the AICPA recommended that the IRS develop such a form to track the shareholder’s basis in both the stock and debt of the S corporation annually, as required by Sections 1367 and 1366.

Of course, such a form would only be as useful to the tax preparer as its availability and accuracy; a new preparer may take over a return of a shareholder only to find that the previous preparer has either failed to file the form or computed basis incorrectly. This is particularly likely when the shareholder previously prepared his or her own return.

Despite the potential shortcomings, a required shareholder-level form reflecting annual basis adjustments and a year-end basis balance would be a welcome change within the preparation industry, hopefully putting an end to many late nights spent at the office attempting to rebuild decades worth of incomplete information.

For more from Tony Nitti, follow his tax policy blog on Forbes. For all your CPE tax code courses, visit surgentcpe.com.

Tony Nitti, CPA, is a Tax Partner in WithumSmith+Brown’s National Tax Service Group in Aspen, Colorado and an instructor for Surgent CPE. Tony is a licensed CPA in Colorado and New Jersey, and holds a Masters in Taxation from the University of Denver. His specialty is corporate and partnership taxation, with an emphasis on complex mergers and acquisitions structuring. He has published numerous feature articles in Forbes, the Tax Adviser, and Taxes Magazine, and has been quoted in the Wall Street Journal, Bloomberg, and CNN Money.