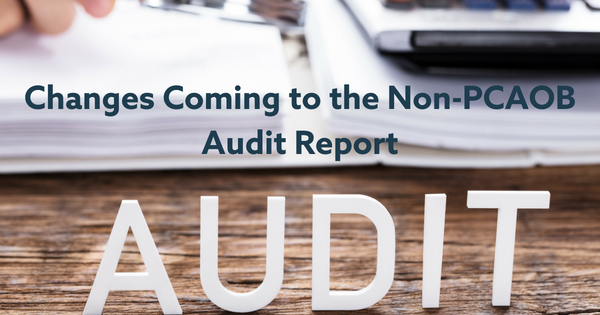 We’ve heard quite a lot recently about the coming inclusion of critical audit matters (CAMs) in the audit report for audits following PCAOB auditing standards. CAMs are those items that have been reported to a client’s Audit Committee and relate to accounts or disclosures that are material to the financial statements and involve especially challenging, subjective, or complex auditor judgments. The goal of including CAMs in the audit report is to increase the transparency to the audit stakeholders of the most significant items which the company’s auditors addressed during their audit. This proposal was recently approved by the United State Securities and Exchange Commission (SEC) and will be phased in, based on the size of the reporting entity, starting in 2019. This proposal mirrors a similar requirement under international auditing standards, where the inclusion of similar information as CAMs is required for listed companies, but is optional for non-listed companies.

Now, the AICPA is getting into the act of including more transparency in the audit report of audits of non-SEC clients. In a series of recent exposure drafts, the AICPA is proposing to allow auditors to include key audit matters (KAMs) in their audit opinions for non-PCAOB audits. The inclusion of KAMs would be optional, not required, unless if required by law or regulation. The definition of a KAM in the proposed changes to auditing standards is consistent with that found in International Standards of Auditing (ISA) 701 and is defined as matters that, in the auditor’s professional judgment, were of most significance in the audit. The auditor would include KAMs in the auditor’s report when required by law or regulation or when the auditor decides to do so.

This proposal represents the AICPA’s response to recent calls for changes from both the United States and other jurisdictions in the format of the current auditor’s report, specifically seeking more information about significant aspects of the audit. Additionally, if adopted as proposed, the revised auditing standards would conform the AICPA audit report to that issued under ninternational auditing standards as well as move the format of the audit report for non-PCAOB audits performed under generally accepted auditing standards closer to the revised reporting format which was recently adopted by the PCAOB. Under these changes, the auditor’s opinion paragraph in a PCAOB audit now comes at the beginning of the auditor’s report, rather than at the end, where it formerly did.

The AICPA will accomplish these changes through the following new Statements on Auditing Standards (SASs):

These proposed standards would supersede the following sections of SAS No. 122, Statements on Auditing Standards: Clarification and Recodification, as amended:

These proposals, if enacted, will have a significant impact on both auditors and clients alike. First, from the client’s perspective, KAMs will result in the disclosure of potentially significantly more information about those items which the auditor addressed in performing the audit. Similar concerns about the disclosure of confidential or company proprietary information and increased litigation risk, which were raised with regard to KAMs would similarly apply for companies not subject to PCAOB audits.

From the auditor’s perspective, identifying KAMs and appropriately wording them will require significant  judgment and will also result in additional efforts in completing the audit. Plus, their inclusion may result in disagreements with client management as to the wording of the KAM and even if the KAM should have been included in the auditor’s report.

The comment period for the proposed changes has recently ended, with the AICPA now shifting through the various responses which it received on the proposal. In the exposed documents, the proposed effective date for the new SASs and amendments to existing SASs would be no earlier than for audits of financial statements ending on or after June 15, 2019.

If enacted, the inclusion of KAMs will significantly change the format of the auditor’s report and potentially even impact the auditor-client relationship. As the goal of the AICPA is to converge its auditing standards with international standards, as well as, whenever possible, PCAOB standards, it is likely that the proposal will be enacted in some form. The key for both auditors and clients alike is to follow the progress of the proposal, be prepared for its issuance and hope to learn from the experiences of those who have implemented the international standard on KAMs as well as those implementing the PCAOB standard on CAMs.

You can get up to speed on this proposed change as well as all recent activities of the AICPA through attending Surgent CPE’s Accounting and Auditing Update course ACAU.

Changes Coming to the Non-PCAOB Audit Report was last modified: May 25th, 2018 by Nick Spoltore