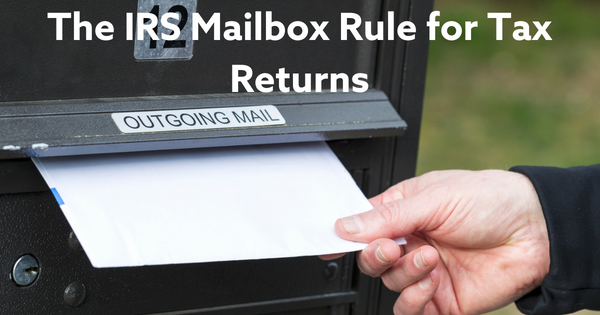 Undoubtedly, the grand majority of people reading this are aware the mailbox rule deems a return filed as it is placed in the mailbox and correspondingly postmarked the same day. An enterprising taxpayer unsuccessfully attempted to extend the rationale of the mailbox rule in Plato v. Commissioner, USTC 1/24/2018. Mr. Plato and his bride separated in December, 2007 and did not cohabit thereafter. He prepared and signed a 2007 1040 with MFJ status and a liability of $46,073. On April 15, 2008, he left the joint return along with a check for the $46,073 “under the mat at the front door” of his wife’s residence ostensibly for her to sign and mail to IRS. There was absolutely zero evidence that the return was mailed or the check cashed. Mr. Plato requested no extension but asked his wife to request one. Just as with the 1040, no extension was filed.

In response to the inevitable failure to timely file penalty, Mr. Plato argued without avail that reasonable cause existed to vitiate his willful neglect in not filing the 2007 return. Yes, wait for it – The reasonable cause was signing the joint return and leaving it with the check under the mat of his wife’s residence. He also referenced his history of compliance in filing tax returns. Now, there are some interesting implications. Foremost, I believe is the need for both signatures on the return, and the Court pointed out that even in the situation where a couple is separated, failure to obtain the second signature on a MFJ filing does not always form reasonable cause to avoid a tax penalty. The second takeaway is the notion that a taxpayer is unable to rely on an agent to timely file a tax return. Could this logic based in the law of agency be extended to include USPS, FedEx and UPS as agents? Aren’t they acting as agents in delivering a taxpayer’s return? If the admittedly tenuous but thought-provoking argument is considered at any length, then perhaps belt-and-suspenders taxpayers would need to hand deliver returns to IRS service centers and not rely on agent carriers. Obviously, that is a bit much on hyperbole and not really grounded in practicality, but you get the point.

As for taxpayer, I genuinely admire his attempt to extend the mailbox rule to the doormat rule. Necessity, who is the mother of invention – words attributed to another Plato.

Nick Spoltore is VP of Tax & Advisory Content for Surgent CPE. Mr. Spoltore is a graduate of the University of Notre Dame and of Delaware Law School. Before joining Surgent, he practiced tax and business law at the firm of Heaney, Kilcoyne in Pennsylvania and also in Delaware.